DES MOINES – Locked in a tight race, a smaller grouping of presidential candidates is likely to share an Iowa debate stage just three weeks before the state’s caucusgoers make the nation’s first picks among Democratic candidates.

It’s one of the candidates’ last big pitches before the caucuses Feb. 3 – and they have a lot to prove to Iowans. A majority of likely Democratic caucusgoers say they’re undecided about their choice for the nomination and are open to changing their minds, according to polling and dozens of interviews along the campaign trail.

“This is a last look for everybody,” said Sue Dvorsky, former chair of the Iowa Democratic Party. “Us, and everybody in the country.” 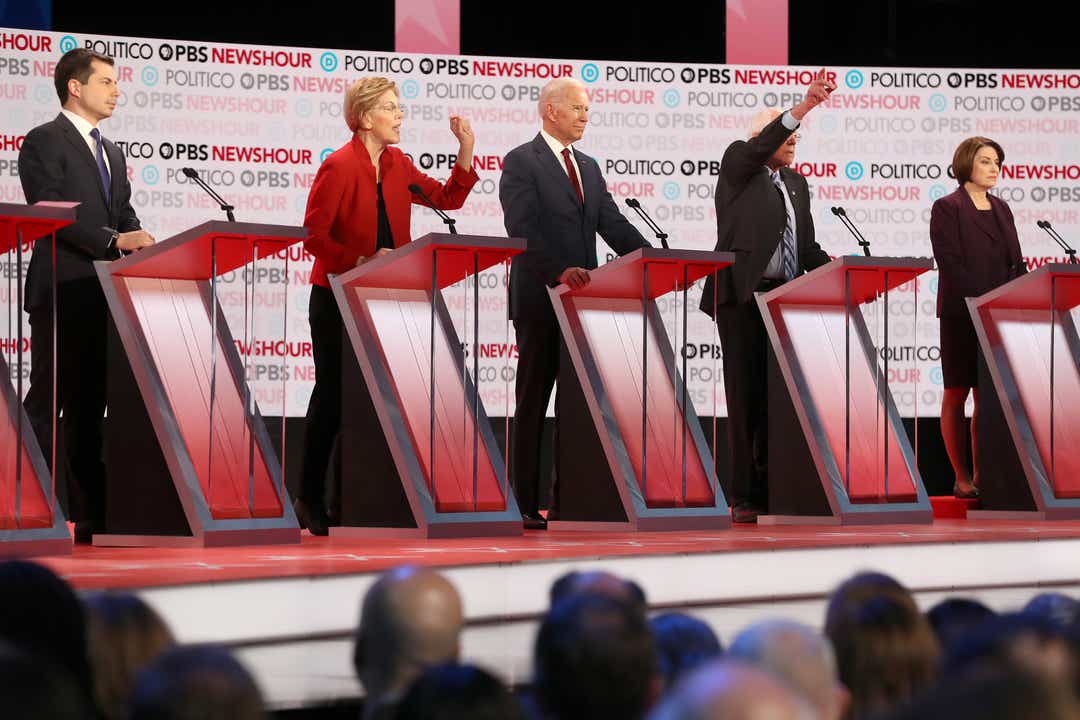 The two-hour event, hosted by CNN in partnership with the Des Moines Register, will be held from 9 to 11 p.m. EST Tuesday at Drake University in Iowa’s capital city. The debate will be livestreamed on DesMoinesRegister.com.

Iowans, known for paying close attention to news and policy, will have a lot to follow. In a race that has largely focused on health care and climate change, foreign policy is likely to subsume debate energy as tensions in the Middle East have risen following President Donald Trump’s decision to order an airstrike that killed a top Iranian official.

Meanwhile, Trump’s impeachment and a pending Senate trial loom over the debate. Sanders, Warren and Klobuchar, scheduled to participate in Tuesday’s debate, also are likely to be jurors in an impeachment trial.

Climate change: Your guide to the 2020 Democratic candidate’s positions on the environment

Health care:The 2020 Democratic candidates share their thoughts on prescription drug costs, Medicare for all and more

But impeachment timing remains unclear. House Speaker Nancy Pelosi has said she will send articles of impeachment to Senate Majority Leader Mitch McConnell only when she is given more information about how the Senate would conduct its trial.

All of this will happen amid a backdrop of media and political pundits questioning whether Iowa should keep its first-in-the-nation role in the nomination process. With no candidates of color qualified to join the stage as of late last week, the state’s predominantly white population may become a topic of conversation.

“I don’t think (the candidates are) going … to take pot shots at Iowa, but they might use it to talk in coded language about the process,” said Karen Kedrowski, director of the Carrie Chapman Catt Center for Women and Politics.

The killing of Iranian Maj. Gen. Qasem Soleimani has dominated recent national news cycles. At events in Iowa and elsewhere, the candidates have addressed his death and escalating developments in the Middle East.

“This is just a classic case of how the agenda is not in control of the people running for office,” Kedrowski said. “Sometimes historical events just take things over.”

Candidates have touched on a range of foreign policy issues in previous debates and have largely shied away from attacking one another on the issues. Given the urgency of the situation in Iran, Tuesday’s debate will give them the chance to tout their foreign policy credentials, said Dave Peterson, professor of political science at Iowa State University.

Biden has long emphasized his decades of foreign policy experience, which include his time as vice president under President Barack Obama and as chair of the U.S. Senate Foreign Relations Committee. But rivals will likely criticize his 2002 vote to authorize military force against Iraq. Biden has expressed regret over the vote, but he’s also given conflicting narratives about the timeline of his disapproval. His answers have been inaccurate and “unsatisfying,” Peterson said.

“If I were any of the campaigns, I’d spill a little blood in the water on this,” he said.

2020 candidates on foreign policy: The Democrats running for president tell us how they would deal with Iran and North Korea

Sanders, who was also a senator before the war with Iraq, voted against the U.S. invasion. He has made it a point to reflect on that and his long pacifist record on the Iowa campaign trail. In recent days, Sanders has called out Biden over his vote, a sign it could come up on Tuesday.

Buttigieg, who served in the U.S. Navy Reserve and was deployed to Afghanistan in 2014, is the only candidate on stage with military experience. He is likely to showcase how that has shaped his foreign policy views.

Besides veterans’ issues, foreign policy nuances generally have not been top of mind for Iowans who get the chance to ask questions of candidates who traipse through the state, said Rachel Caufield, professor of political science at Drake University.

After Soleimani’s death, Warren answered questions from the media on the general’s killing but was not asked about the issue by caucusgoers at recent Iowa campaign events. Biden and Sanders, on the other hand, incorporated remarks on Iran into their stump speeches.

What does each candidate need to accomplish?

With 20 days left, Tuesday’s debate leads off the candidates’ final push to caucus night. Most will be looking to capture the attention of undecided caucusgoers.

Because it’s the last debate before the caucuses, Caufield said she expects all the candidates to focus on why they’re the best person to defeat Trump. Iowans have made beating Trump a top priority in choosing a candidate, Iowa Polls have found.

Caufield predicted Klobuchar will tout her Midwestern roots and her record of winning in counties that voted for Trump; Warren will highlight her plans for anti-corruption and changing the system; Sanders will stick to his populist message; Buttigieg will highlight his faith and perspective as a Washington outsider; and Biden will remind voters that Obama handpicked him to be second-in-command.

Steyer, who qualified to join the debate stage Thursday evening, has blanketed Iowa airwaves with ads promoting his ability as a successful businessman to take on Trump over stewardship of the economy.

In such a close race among the top candidates, Warren will need to “remind voters why they fell in love with her in the first place,” Peterson said. Warren has seen ups and downs in early-state polls, riding to the top of September’s Iowa Poll, then dropping a few points.

Warren will also likely highlight her recent endorsement from Julián Castro, the former secretary of housing and urban development who was running for president until just a few days ago, Peterson said.

“I think this could allow the Warren campaign to generate some excitement among her supporters,” Kedrowski said. “It’s not just the same old ‘I’ve got a plan for that.'”

For Biden, he’ll be working to “shore up existing support” by touting his track record and solidifying his moderate Iowa appeal, Peterson said.

Buttigieg will need to come prepared to defend his lack of Washington experience and, as in previous debates, his high-dollar fundraisers.

“If I were him, I would hope that everybody focuses on Bernie and Biden,” Peterson said.

Sanders, on the other hand, may need to bring fresh ideas to the debate stage to win over new caucusgoers. He’s maintained a steady core of supporters, some of whom have been ardent fans for years, but he hasn’t expanded his support much beyond that base.

“What have we learned about Bernie Sanders that we didn’t know four years ago? He’s literally the exact same candidate,” Peterson said.

Tuesday’s debate may set the stage for a lower-tier candidate to break out of a polling rut and make a surprise showing come Feb. 3.

Klobuchar, who has spent a lot of her time in Iowa, needs to build traction to make a solid showing in Iowa, Caufield said.

“It is entirely common in the final week or two weeks before a caucus that one candidate gains substantial momentum and significantly surprises us,” she said. “Amy Klobuchar seems poised to be one of those candidates if she can really take off and build the momentum.”

The expected focus on foreign policy could further shift debate conversation away from health care, which has drawn extensive attention throughout the 2020 cycle. Candidates have been asked during multiple televised debates about whether the government should provide universal coverage to address rising health care costs.

Unlike in the previous debates, health care was not discussed extensively during the sixth debate in December. Penny Rosfjord, a party activist who is a former chair of the Woodbury County Democratic Party, welcomed that.

In interviews with the Register, Iowans say they hope health care stays a low priority on the debate stage, making room for other issues such as immigration, college student debt and agriculture. Ongoing historic flooding in Iowa and devastating wildfires in Australia will likely serve as a backdrop for the discussion over climate change.

Should it be a crime to enter the U.S. illegally?: We asked the 2020 candidates, here’s what they said

2020 candidates on education: Here’s where they stand on student loan forgiveness, free college and more

“Those issues are really pivotal to us and our futures,” she said.

Steve Villatoro, chair of the Iowa Democratic Party’s Latino Caucus, said he is hoping to hear candidates take up Castro’s positions, specifically on immigration. The former candidate also highlighted issues such as racial inequity and the need for affordable housing.

“The point here is the African Americans and Latinos are part of a democratic society, and we’d like to have a platform for our communities,” Villatoro said.

How to watch: The debate will air live on CNN. A free livestream of the event will be available online at DesMoinesRegister.com and CNN.com and on mobile devices via the Register’s iOS and Android apps.

Kim Norvell covers growth and development for the Register. Reach her at [email protected] or 515-284-8259.

Barbara Rodriguez covers health care and politics for the Register. She can be reached by email at [email protected] or by phone at 515-284-8011. Follow her on Twitter @bcrodriguez.

Trans women are men according to trans woman